Mr. Lang is a native Mobilian and a product of Mobile County Public Schools, where he graduated in 1979 from Davidson High School.

Lang continued his education by attending the University of South Alabama, where he earned a bachelor's degree in political science in 1983. He served nine years in the military, including five in the Marines and four in the Army. He served in South Korea and in Saudi Arabia during Desert Storm.

Staff Sergeant Lang returned home in 1992 to pursue a career in education, earning a teaching certification in social science (1994) and a master's degree in education administration (2006), both from the University of South Alabama.

Highlights of his career include being selected as Mae Eanes Middle School's Teacher of the Year in 1996, coaching two State Championship football teams (Blount High school in 1996 and 1997), and numerous County and Area Championship teams (Blount, LeFlore and Mae Eanes). He has presented at High Schools That Work annual staff development conferences and was instrumental in starting two Fellowship of Christian Athletes chapters in MCPSS.

Since his high school days, Mr. Lang has had a passion for coaching, mentoring and community involvement. He has used that passion to develop his core belief that: "Failure is not an option." 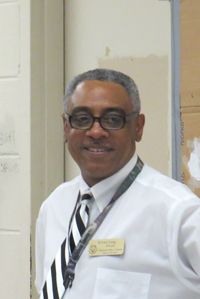